The 2022 Bear Market Is The #1 Opportunity For Web3 Developers!

That’s right, you heard me. The early excitement fading away from the blockchain industry is leaving room for a stable environment for aspiring developers.

Now, we always knew this wasn’t the case but until we hit a ROUGH patch, it was hard to justify.

We could point to the MANY developers we’ve helped get a 6 figure job, but most would think this might be short-lived.

But now, we’re past the early adopter stage of blockchain, smart contracts and others, and Web3 is INEVITABLE.

The average salary of a smart contract developer is $120k per year.

And a lot of them are able to work remotely. Even in this bear market, Web3 developers are HIGHLY sought after…

Are you ready to make the jump and become a 6 Figure blockchain developer?

This is everything you need to learn the skills of Web3, build your portfolio of impressive projects and command a 6 figure salary as a developer.

This includes a lifetime to all of the courses we offer allowing for your to specialize or not.

This is about helping you from A to Z and getting your first 6 figure job through our proven process.

Full Support Through The Program

This offer is PACKED with different channels and way of getting support and feedback on your work.

Finding people to go on this journey with is one of the best way to make sure you make it to the finish line.

What people are saying about the course: 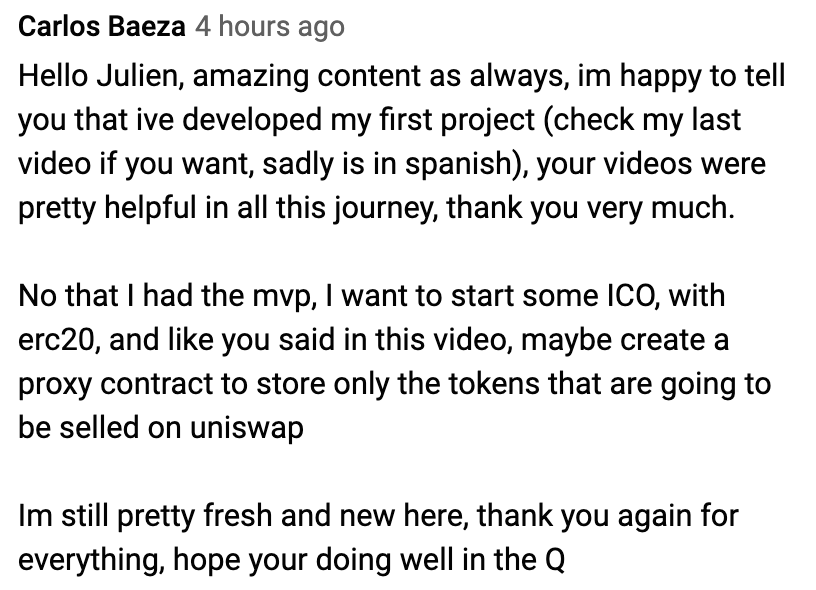 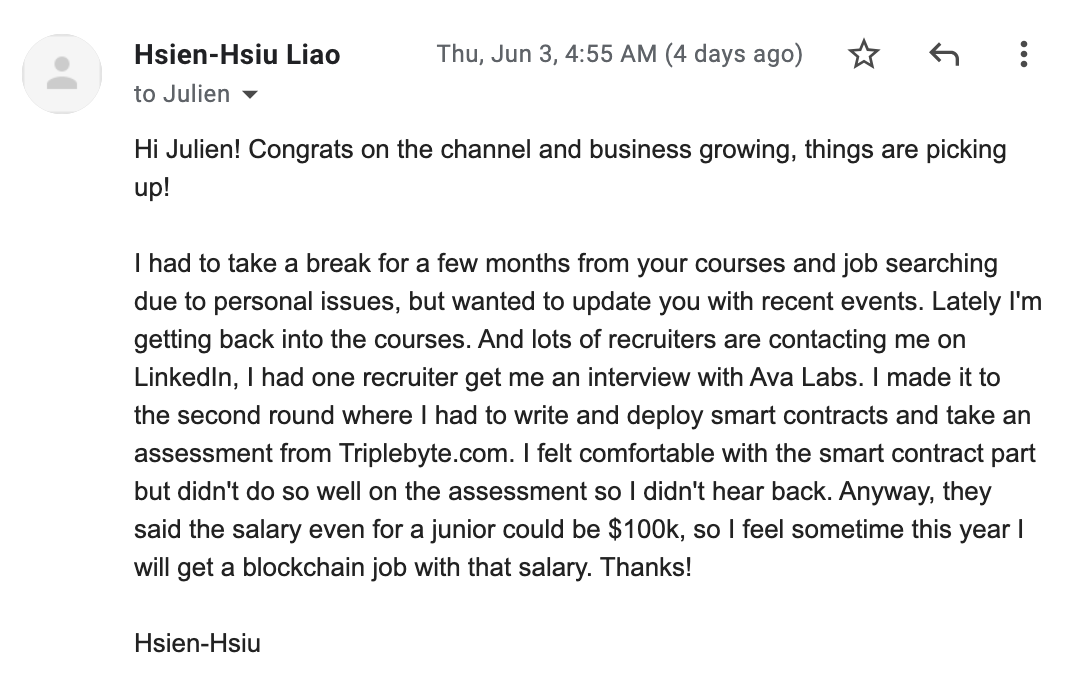 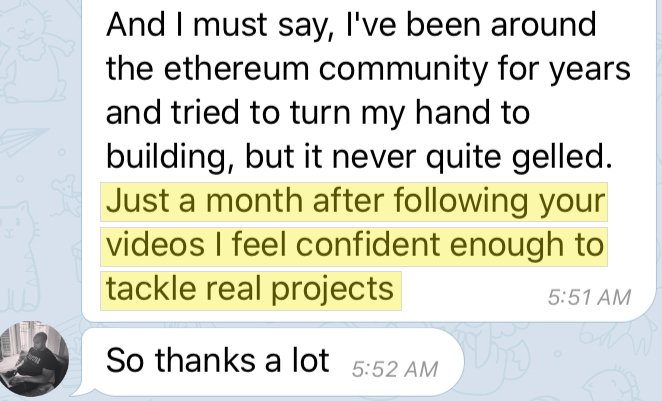 Lifetime Pass To The Full Library Everything You Need To Get A 6 Figure Job:

3 month of support via our private Discord community

Simply submit your portfolio of projects and you'll receive personal feedback from a professional Web3 developer!

A Personalized Linkedin and CV review

Let's make sure your future employer can find you! This is a full review of your profile and recommendation to make you hire-ready.

Meet our exclusive community of students that have made their Web3 developer dream come true and learn from their experience.

10 people selected for a 1 on 1 call with Julien

We'll select 10 people at random to have a private conversation with Julien and talk about their Web3 career and how to supercharge it!

Hear What Other Have To Say:

The Web3 Gold Rush Has Started: Sell The Shovels


Crypto, NFTs and other assets can go up and down, but as a Web3 developer you won’t have to worry too much about it…

By selling the proverbial shovels, you ensure that you’re getting HANDSOMELY paid no matter what ;)

The truth is: Web3 is inevitable and Web2 developers will have to make the jump at some point.

Will you be jumping boat early and take advantage of the boom?
Or be left behind working in the legacy industry…

(Or pay in crypto)

(Or pay in crypto) Look at what past students have to say: 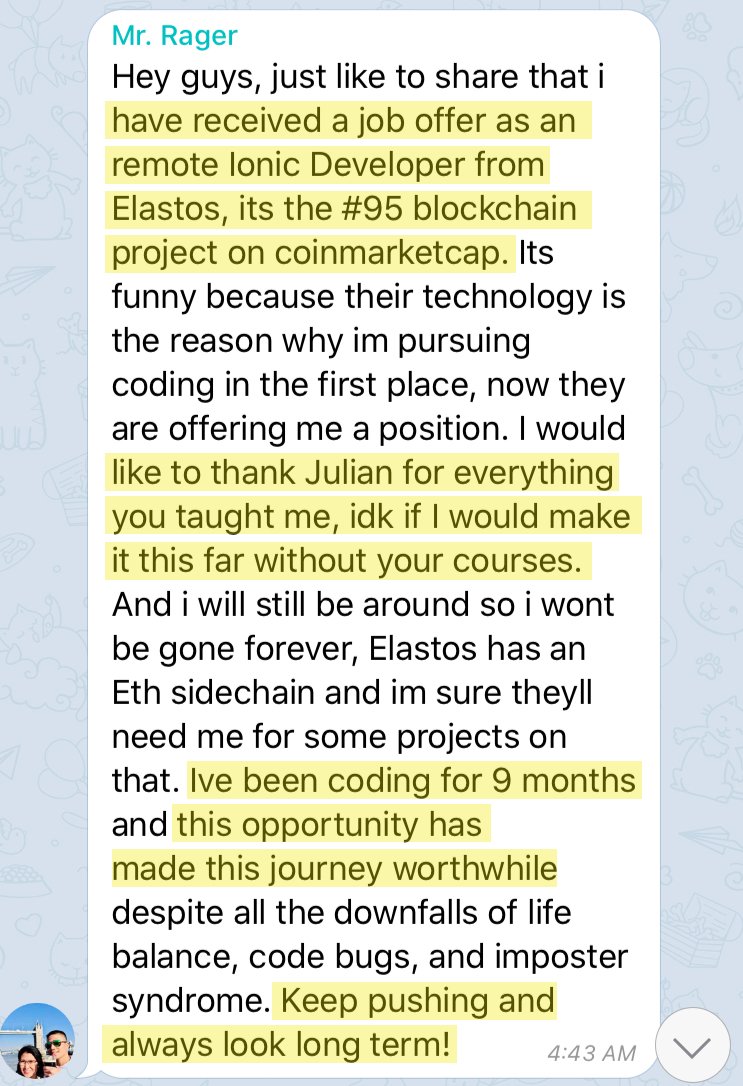 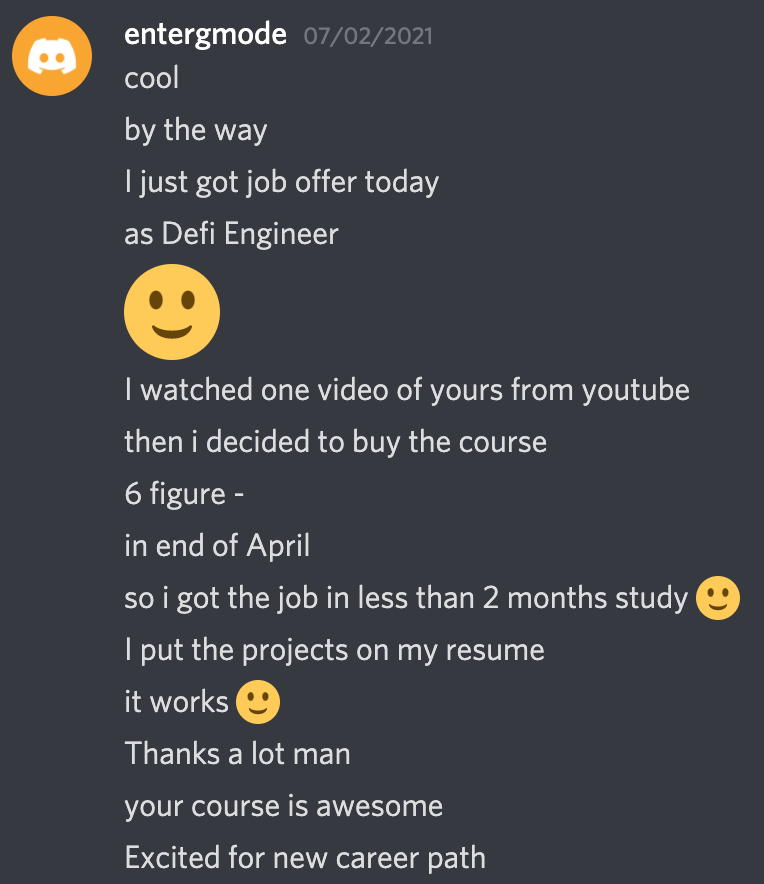 I've never signed up for something like this before. How does it work?

First off, congratulations for getting to this step in the process. Learning something new is challenging and I command your effort!

What will happen is as soon as you enroll, you will get instant access to everything we’ve listed on this page including access to the member’s platform where you’ll be able to start right away :)

Will I get any support?

As part of this exceptional package, you will get 3 months of support in our private Discord group, and a WEEKLY live zoom call for questions and feedback.

The end of the year is coming around and we wanted to give you an opportunity to make it count and prepare for 2023.

First, this is a very special package where we took everything needed to stack the deck in your favor and make this Web3 developer lifetime come true.

Second, we slapped our biggest discount to date on it: 70% off.

If you’re serious about this, there’s never been a better time to start than today!

I’m still working on my Web2 skills, can I still take this program?

We know some people are still brushing off their legacy developer skills or might just need a refresher.

That’s why we’ve added the 2nd package to this offer which includes an exclusive LIVE Web2 bootcamp with Julien.

You have no excuse not to get started now ;)

What kind of guarantee of results do I have?

And we have no intention of stopping there!

Our reviews speak for themselves, but we don’t want to pretend this is always easy.

However, if you’re willing to put in the work and follow the proven process we’ve developed, there’s no reason this wouldn’t work for you too :)

If you are not happy with your purchase, you have 7 days to ask for a refund, and we will give you a refund, no questions asked :)

I’m busy right now and may need to do this later, what should I do?

This is the best deal we’ve offered all year, so there’s no better time to enroll.

The program is mostly self paced and you can spend as much time as you have right now to go through it at your own pace.

A Note From Julien

I’ve been helping Web3 developers get a 6 figure job for years and couldn’t be more excited right now!

This is a once in a century opportunity and it's such an honor for me to be a voice and guide in this journey for so many.

After doing this for a while, one of the #1 thing I hear students say is how good it feels to be chased after by recruiters and seeing the bidding war unfold.

It’s truly an exciting time and very accessible to anyone willing to put in the legwork.

I’d love to invite you in with this very special Black Friday deal :)

EatTheBlocks is the leading online coding school for Web3 development.